To examine the impact of a +2°C global warming for the various sectors and regions, several dedicated model chains are applied within IMPACT2C. In general these chains consist of General Circulation Models (GCMs), Regional Climate Models (RCMs), impact models and assessment models.

The GCM simulations have been conducted within the Coupled Model Intercomparison Project Phase 5 (CMIP5)1 representing various scenarios of greenhouse gas emission pathways. The data of the GCM simulations are then used as driving data for RCM projections. For this purpose, simulated atmospheric temperature, moisture and wind fields as well as the sea surface temperature from the GCMs are utilized as lateral and lower boundary conditions driving the RCM simulations. Finally, the data of the downscaled climate simulations are used as input for impact and assessment models, like for example process based hydrological models or crop models as well as for statistical regression models. For these model simulations mainly near surface parameters, like near surface air temperature, precipitation fields, humidity, wind and radiation are used. A schematic of the general methodological pathway applied in IMPACT2C is provided in Figure Generalized methodological pathway. 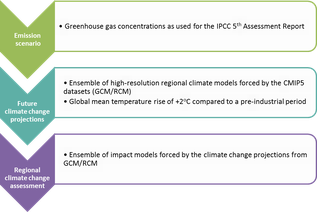 In order to define a common +2°C global warming period used within the IMPACT2C project the following procedure was applied: 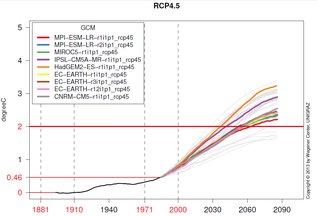 The final ensemble available for the IMPACT2C impact assessment studies consists of the five mandatory climate simulations as input for the impact models. Depending on the number of subsequent impact models applied, the resulting ensemble of climate change impact simulations could increase up to a maximum of 25 ensemble members (e.g. analyses using five hydrological impact models).

Exceptions to this ensemble are the ”Coastal Themes” and ”Health” assessments. For the ”Coastal Themes”, sea level information has been taken from a single coupled GCM (HadGEM2-ES) only and other time periods have been considered due to the delayed reaction of the sea-level to a global warming (for details see story on “Coastal Themes“). For the “Health” topics related to air pollution, four chemistry-transport models have been applied (for details see story on “Health“).

In order to use the mandatory climate simulations as input for climate change impact assessment studies the data have been bias corrected using the well-established and widely applied quantile mapping bias correction method2.

2 For more details on the method, see the open-access publication of Gobiet, A., Suklitsch, M., and Heinrich, G.: The effect of empirical-statistical correction of intensity-dependent model errors on the temperature climate change signal, Hydrol. Earth doi:10.5194/hess-19-4055-2015, 2015.