1. Why is it important to consider climate change impact on health?

Residents of the European Union are at risk from both direct and indirect impacts of climate change. These include air pollution impacts, heat and cold related effects, impacts of extreme events such as storms, floods or wildfires, vector and rodent borne infectious diseases, food and water related diseases, allergic diseases and ultra-violet exposure.

Within IMPACT2C ozone pollution, particulate matter air pollution and heat mortality have been analyzed under a +2°C global warming scenario. The overview of all topics within this story and the methodological pathway applied to estimate the impact on the health sector are presented in Figures method path and Health topic tree.

Four chemistry-transport models has been applied to evaluate how climate change might affect the efficiency of emission abatement policies at European scale, and how this affects health. Particulate matter and ozone air pollution has both an impact on climate change as well as on human health and ecosystems. Some compounds of particulate matter such as soot induce a warming while others such as sulphates induce an albedo effect and a climate cooling. Ozone's impact on climate consists primarily of changes in temperature. The more ozone in a given parcel of air, the more heat it retains. Both particulate matter and ozone air pollution affects human morbidity and mortality. A higher ozone concentration leads to a higher mortality risk.

Furthermore, increasing heat under a +2°C global warming scenario affect heat mortality in Europe. This analysis focused on estimation of additional health impacts and costs from climate change, the change in the numbers of premature deaths from ozone, and the change in the life expectancy (life years lost) from PM2.5. 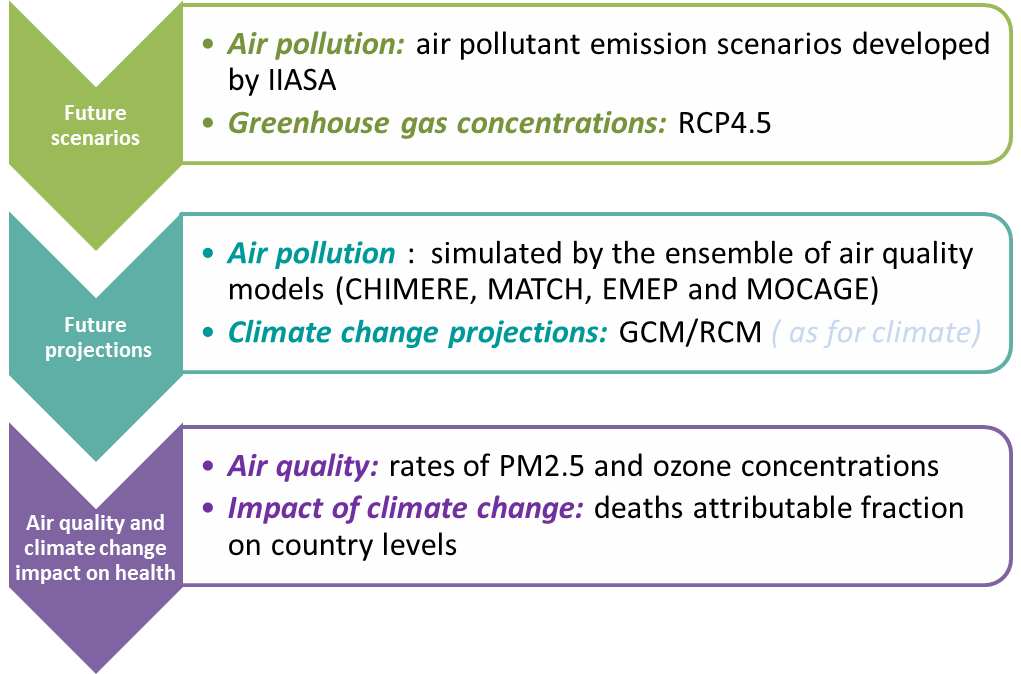 In the IMPACT2C project, the effect of +2°C global warming was combined with expected reductions in air pollutant emissions for ozone and particulate matter. The specific results are the following: Air pollution from ozone is changing in many areas, but the amplitude of change remains small in the area of 0-1.5 ppb. Pollution of particulate matter concentration increases are found in Southern Europe, but their amplitude remains small as well.

Heat mortality in Europe is expected to increase by an average of about 23,100 additional heat-related deaths during the warm season under a scenario of +2°C global warming. Citizens from the Mediterranean (Cyprus, Greece, Spain) and central-eastern European countries (Bulgaria, Hungary and Romania) are projected to be most affected by the increase of heat mortality. However, residents in other European countries are subjected to an increase of heat-related deaths during the warm season.