1. Why is it important to consider climate?

The overview of all topics within this story and the methodological pathway applied to estimate the changes in various climate parameters and indices are presented in Figures method path and Climate . The basic set of mandatory climate simulations has been applied to provide the information on climate change. The ensemble of five hydrological models has been used to assess climate change impacts on evapotranspiration. The hydrological model VIC was selected to investigate the impact of +2°C global warming on snow season length. The changes in the mean climate indicators such as temperature, precipitation and evapotranspiration, and the changes in extremes such as extreme precipitation, summer heat waves and tropical nights and cold spell duration, are investigated. Extreme precipitation, e.g., affects directly the human welfare as flood events and landslides caused by extreme precipitation can lead to human loss. Further temperature-related indicators were assessed, such as the number of freeze-thaw days, snow season length and the thermal growing season length. These indicators can be directly related to impacts, e.g., freeze-thaw days can affect aviation, roadways and railways. 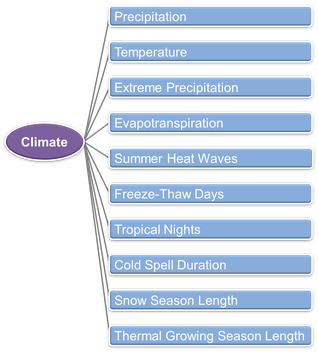 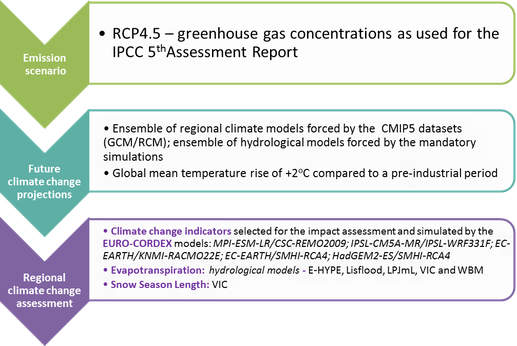 The assessment of the temperature values showed that most regions in Europe exhibit a robust warming greater than the global average. The warming is greatest in the North during winter and in the South during summer. Precipitation is projected to increase in the northern part of Europe and to decrease in the southern part. The drying in southern Europe is most pronounced in the summer months. Changes in evapotranspiration follow changes in precipitation where generally 30 to 50% of the increase in precipitation is counteracted by enhanced evapotranspiration. Concerning heavy precipitation in Europe, an overall slight increase is projected under +2°C conditions. There are single regions which experience stronger increases in extreme precipitation than others. One of these regions is the area of North-East Italy, Western Slovenia, and Southern Austria, where an increase of up to 6 mm/day in extreme precipitation is projected. Heat waves are expected to become more frequent, more intense and to last longer. Under a +2°C global warming scenario, the number of heat wave days is projected to more than double in Europe, with much larger increases in Mediterranean areas. Tropical nights are becoming more frequent in southern Europe. Also central and eastern Europe are expected to experience more tropical nights.