1. Why is it important to consider sea-level rise

Rising sea-levels are a major concern especially for the coastal population. It is therefore important to estimate the magnitude of possible future sea-level rise (for more details, see background information) and its potential impacts. Within IMPACT2C focus has been set to estimate the potential costs of sea-level rise for flooding and adaptation for EU countries, as well as people exposed in port cities with a population of greater than 1 million people around the world (see Figure Coastal Themes topic tree).

The methodological pathway applied to tackle the coastal themes is presented in Figure method path. The projections for the three emissions scenarios RCP2.6, RCP4.5, and RCP8.5 are based on the results from the global climate model HadGEM2-ES. The Dynamic Interactive Vulnerability Assessment (DIVA) modelling framework has been implemented to estimate the number of people who will be at risk from flooding, as well as damage costs. With respect to socio-economic conditions, the costs and impacts follow the SSP2 scenario (see background information). 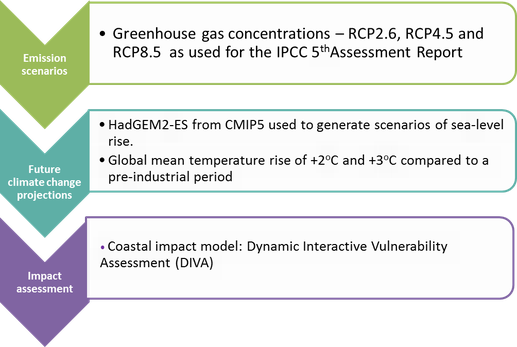 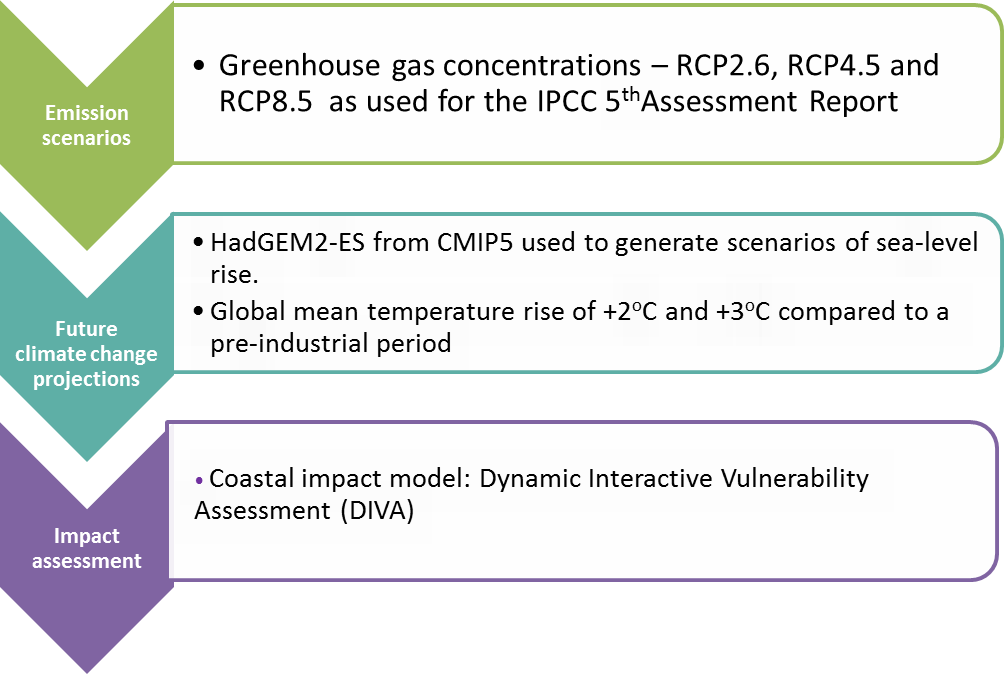 In general, sea-levels will continue to rise even if temperatures stabilise at +2°C global warming. In Europe, highest flood costs are projected for low-lying North Sea nations. Some costs will occur even under conditions of adaptation. Due to large costs resulting from coastal flooding, nations surrounding the North Sea will benefit most from climate mitigation. The annual sea-dike costs will increase as sea-levels continue to rise. Therefore, adaptation needs to consider long-term conditions.

For the world’s coastal ports sea-level rise can have significant social and economic consequences, as higher water levels can lead to extensive storm flooding. Many coastal port cities already have populations greater than 1 million people, which are potentially affected. This study considered 136 port cities worldwide. Reaching 2°C around 2040, about 75 million people may be exposed to a 1:100 year storm event in the considered port cities. Sea-level rise under +2°C and +3°C global mean temperature increase reached later in the century is also considered. About 4.7 million people more are possibly affected under a 3°C global temperature increase.